Here is a list of some of the talks and interviews I’ve given. 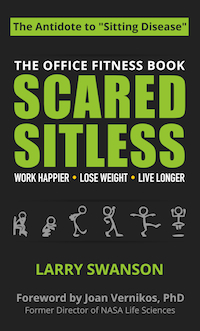 Ask your local bookstore to stock it, too. It’s available to the trade through Ingram.

“Nice, level-headed discussion of the issues with sitting, with practical advice for people like me who spend way too much time sitting in front of the computer.”
– Eric Jain

“This book is full of empirical evidence, practical tips and exercises. I found it easy to read. I have already learned a lot and would highly recommend it to anyone who has to sit a lot.”
– Bonnie Bhatti, PhD, LICSW

“I highly recommend this book for people looking for straightforward ideas on improving health in today’s office environment.”
– Joe Follansbee